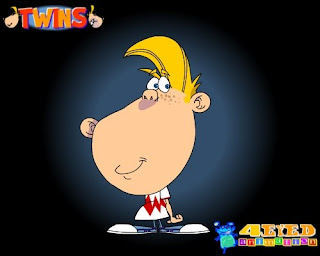 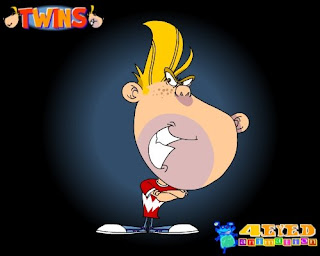 Bobby and Robert are almost completely identical twins that have been brought together by a twist of fate, a TV remote and some crazy satellite positioning. Except for Robert’s 5 o'clock shadow, different hairstyles, and liking different peanut butter types (Bobby is a smooth fan, while Robert prefers chunky style) you’d be hard pressed to tell one from the other. Although they are opposites in just about everything, once united they quickly learn how to peace-fully co-exist. Robert's aggressiveness has caused a few ripples for Bobby, while Bobby's wimpiness exasperates Robert to no end. Robert is definitely a take-charge kinda guy, a natural born leader, while Bobby is more of a wait-and-see person, a natural born follower. Bobby is a big Winnie the Pooh fan, while Robert likes Clint Eastwood. Bobby likes baseball, while Robert likes football. Bobby is little bit country; Robert is little bit rock n’ roll. Robert is a hunter, while Bobby is a gatherer. You’re seeing a pattern here I hope. Their zodiac sign is Gemini…as if you couldn’t guess. 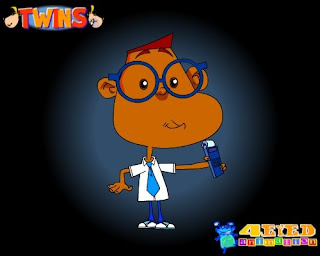 Crispus is Bobby's best friend and super smart to boot. Crispus never goes anywhere without his pocket calculator (and a supply of AAA batteries). Over the many long years (4) of friendship with Bobby, he’s helped him with everything from math homework, to getting Bobby out of some tight spots (remember the time his head was caught in that shop class vise?). Crispus is not one of those “I told you so” friends…oh no, he stands by Bobby no matter how utterly bad his decisions are. Plays a mean game of bridge, but when you’re 8it’s hard to find a competitive foursome. 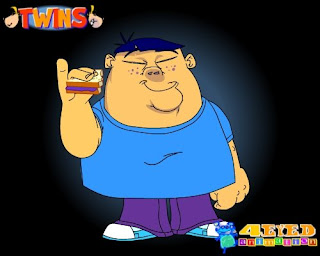 Another of Bobby's cohorts, Chet is perpetually happy…and perpetually large. Because he’s so big for his age (he’d be big for the age of dinosaurs), he doesn't get bullied like the other kids, so it’s nice to have him around when there’s trouble…or when you’d like a little shade. His favorite class is lunch. And although Chet seems like he isn't fazed by much and looks like he's going through life without a care, he really is.Writes a mean Haiku. 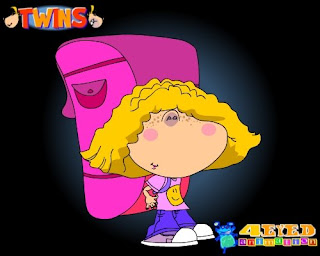 Margie is Bobby's girlfriend, though no one really cleared it with him yet. Margie is known for her backpack which seems to contain more stuff than the Smithsonian. Margie doesn’t back down from a challenge, and is more than enough to be a match for Mike and his gang’s bullying. She would go to then end of the world (or the corner store) for Bobby. Wants to be a lion tamer or a librarian when she grows up. 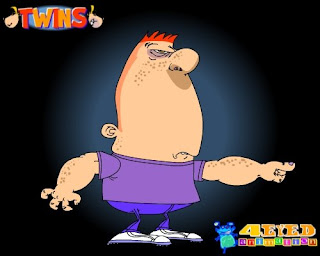 “Big” Mike is the leader of a local band of bullies, think of him as the “Genghis Khan” of his school, and he takes great pleasure in tormenting smaller kids, especially Bobby...hey he's a bully that's his job! Everything is going great (for him at least), respect (fear) is at an all time high, and his piggy bank is filled to the gills with extorted milk money. Then 1 fateful day Robert shows up. Mike’s not used to anyone standing up to his menace. His confidence is temporarily shaken, but like all mule-headed bullies, he's trying to figure out a way to get it back. Grinds his teeth when he sleeps… better than grinding someone else’s I guess. 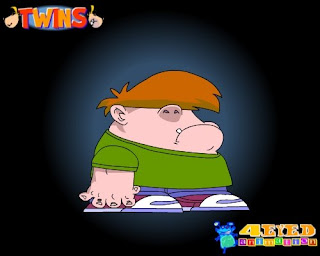 Carly is the prototypical strong, short, nasty silent type. Carly’s main duties are as the enforcer and chief extortionist for Mike. Carly is a kid of few words...he's more of the menacing glare type. Most kids in the neighborhood would rather get 2 flu shots than see him and his single tooth scowl. He’s the schools local wrestling champ in his weight (62.5 lbs) class. His father and mother are professional wrestlers, “Bombastic Burl” and “The Masked Meat Cleaver”. Carly looks to both for; wisdom, inspiration and new holds 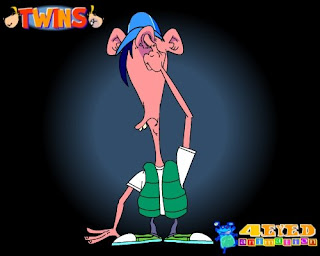 A member of Mike's gang, Lanny is loyal and dependable to his boss. Known for his cackling laugh, wearing his green down-filled vest year-round and yellow teeth, Lanny sends chills up the spines of all the local kids. His best skill is being a "Yes Man" to Mike (he can say "Duh, Yeah Boss" it over forty languages) and seldom (if ever) questions his leadership skills. Plays the French horn in the school band...but not well. Favorite holiday is Halloween. Favorite food is haggis. 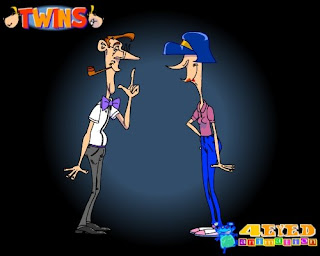 Bobby’s dad works as an accountant, but has many many hobbies to keep him busy in his spare time. He's always reading up on some new hobby, anything from spelunking to skydiving to origami. He really is a great dad, doting on his children, but sometimes a little too much...but he means well.
Bobby's mom is a great cook and was United States Middle Weight Karate Champ in 1992. Mom is a beacon of light when all around is dark. She knows just the right thing to say, and can calm Bobby’s (or Robert's for that matter) most foul moods, with a mother’s caress or a chocolate chip cookie. Like all mother she has special extra sensory powers. 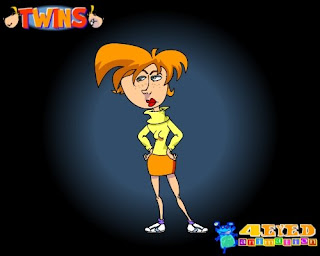 Jasmine is Bobby's talented, pretty, older teenaged sister. An Over-achiever if there ever was one; she's #1 in here class, captain of the cheerleaders, and lead singer in a local rock band, the Veronicas. She grudgingly puts up with Bobby (the little twerp) “Cause he like, is, you know, my brother and stuff.” When Robert is around she senses a difference and lobbies her parents to keep an eye on him and watch his sugar intake and TV watching. 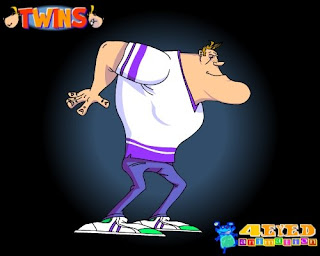 Biff is Jasmine’s boyfriend and local uber-jock. He's the captain of most sports teams at school and as smart as a soupspoon (a bent one to boot). He’s fond of teasing Bobby, but finds it somewhat more challenging dealing with Robert. Actually he also finds it challenging carrying the 1, and tying his shoes...needless to say he owns lots of sneakers with velcro ties. 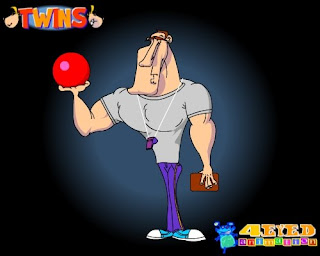 Mr. Patton is an ex-marine, and is as tough as a take home chemistry test. His gym classes can be a trying time for any 8 year-old. Does not deal well with kids that are soft on themselves. Usually has troublemakers run laps, or drop and give him 20. Since no one knows for sure what he means by dropping and giving 20, most choose to run the laps instead. Fond of the term “maggot”. 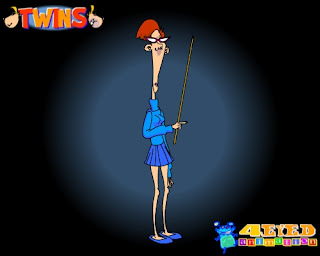 iss Evelyn LeFarge is Bobby's homeroom teacher, and remedial poetry teacher. She's a poet and musician who secretly has a crush on Mr. Patton the gym teacher, and wants to bring out his tender side. He'd just as soon have her not, but she doesn't give up easily. Runs the school band and puts on plays with the drama club. Claims she is related to Amelia Earhart. She raps to show the kids she's "with it". 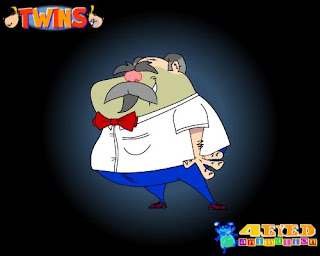 Mr. Spindle tries to run a tidy ship, but he’s a somewhat forgetful administrator. He tends to sweat the details a little too much. Has spent much of his tenure trying to balance the viscosity in the hot lunch pizza, but hasn't found what he considers an acceptable level of oil. His mother made great pizza, why can’t the school’s cafeteria! The search goes on. He wants the students to look up to him as a friend. Right now they look up to him because he is taller...that's a start. 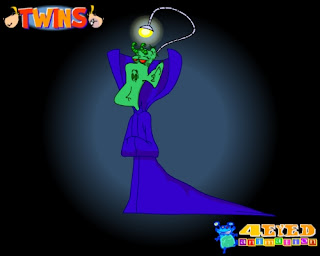 Manfred is Robert's right hand man and confidant. The only one in Robert’s dimension that knows of the time/space rip thing, so he keeps it hush-hush…if a thing like that got out there’d be wide-spread panic. Has a soft spot for Bobby, and helps get him through some of the more difficult times...you know the usual things; alien invasions, state dinner faux pas, and hostile takeovers. Very good at making sure they don't run out of cold fresh milk. 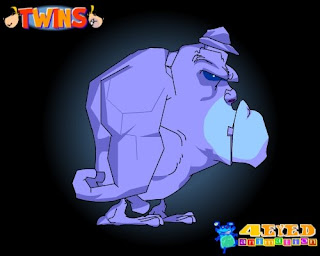 Crock is supreme leader from a nearby planet and Robert's archenemy. Crock is constantly battling Robert for control of their known universe. What he lacks in looks he makes up for in lack of brains. Charitable, kind, understanding and benevolent...these are all words that have nothing to do with Crock. 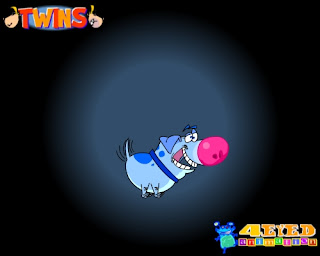 Mooch is Bobby's faithful dog. Not much for playing catch or fetching sticks but makes a great doorstop. Accepts Bobby the way he is and is always ready with a big sloppy kiss to greet him when he gets home after school. He even likes Robert in spite of some of his surliness, because a dog knows good from bad, and deep down inside Robert is good. 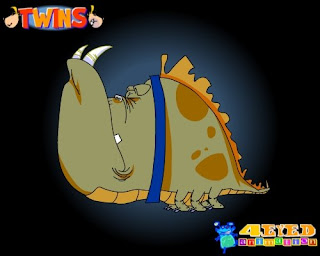 Mooch is Robert's faithful dog. Not much for playing catch or fetching sticks but makes a great doorstop. Accepts Robert the way he is and is always ready with a big sloppy kiss to greet him when he gets home after ruling the planet He even likes Bobby in spite of his wimpiness, because a dog knows tough from weak, and deep down inside Bobby is tough. 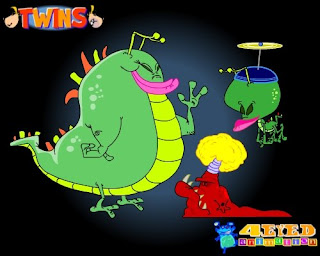 A smattering of other characters we'll run into at various times....
Posted by Joe Corrao 4 Eyed Animation at 5:48 AM

Have you ever been picked on, laughed at, and chased by bullies...well Bobby has. It seemed to him that every bully had his number and was after his lunch money. What's a wimpy 8 year old to do? He took it and took it, and he had his friends and family to fall back on to make everything ok, but he wondered, “What if I was a little more...well tough!” He hoped that someday that he would stand up and fight back against the bullies. Alas he thought, “I’m just too wimpy of a guy, I guess I'm doomed to be picked on forever (sigh)”…but he was wrong, because on one fateful afternoon everything changed...